From San Antonio, head north on 281 towards Bulverde. Take the exit toward FM 1863/Bulverde from US-281 N. Turn left onto FM 1863 W/Bulverde Rd. Drive about 1.1 miles then turn right at Heimer Cove.

Opened in 2009, our office is located in Bulverde. We pride ourselves in our customer service, workmanship, dedication and smooth building process creating a truly custom home that our customers love. 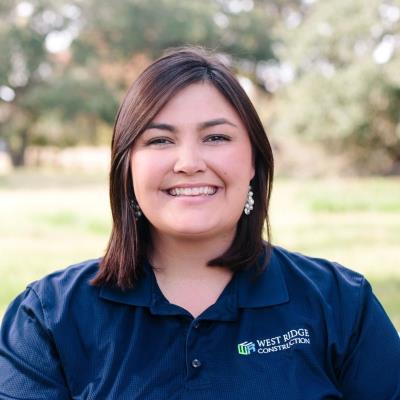 Rachel handles all office operations, including the research of all city and county permits, all financial responsibilities, and the submission of plans to Home Owner Associations at the beginning of each project.

Beau Walker, the founder of West Ridge Construction, is a 2001 graduate of Texas A&M University. After college, Beau worked as Head Superintendent for a production builder in Austin for five years. Beau’s practical demeanor and thirst for knowledge earned him many awards with that company, including Builder of the Year. In 2006, Beau accepted a job as Construction Manager with a custom homebuilder in San Antonio. His ability to relate to homeowners, exceptional time management and organizational skills, and hard work ethic quickly afforded him the position of Vice President of Construction. A personal goal of Beau’s was to own and operate his own business, so in 2009 he established West Ridge Construction. Beau’s experience in the industry and commitment to going above and beyond are reflected in each project and relationship he builds.